The first time I saw a Manta ray I was in awe. I was a child, holidaying with my family in North Queensland . We went on a snorkelling day-trip to a group of coral bommies, part of the Great Barrier Reef, a couple hours motor off the coast. I was enthralled by the other-worldly coral, the crystal clear water and the dazzling schools of fish of every size and shape and colour. As my gaze drifted from the wall of the bommie, several Manta rays with wing spans at least twice as wide as I was tall loomed into view, sliding silently past. These pelagic giants were mesmerizingly graceful and seemed very much at home but were altogether in contrast to the bright colours and flashy, darting pulsations of reef fish. A bridge between the deep water of the open ocean and the bright sun-filled shallows – to us two-legged folk more familiar, closer to home.

I had no idea at the time, but one of the best places to dive with Manta rays is far closer to home and doesn’t require an 18-hour drive to South Mission Beach (with only one Gameboy to share between the three oldest kids – my poor parents!). Yet another of Straddie’s many natural wonders is the Manta Bommie dive site, a collection of rocky outcrops just off Point Lookout that hosts a fantastic variety of sea life, especially through summer and autumn months. It is from that place that our Manta Dark Lager was named, our first Special Release and also the first Straddie Brewing beer ever brewed…

Cast your mind back to simpler times – pre-pandemic 2019. Our development approval was granted in October and our plans were progressing full-steam ahead to begin building our brewery in Dunwich. We were busily sourcing brewery equipment, planning menus, working on beer labels and conceptualising the beers themselves. The next step was to build our pilot system, the first intended use of which was to refine the recipes for our planned core range of beers. Just like a larger brewery, the pilot brewery needed to be put together then tested to make sure nothing leaked and everything worked as intended. Once water-tight and fully functional it was time for a commissioning brew.

I chose to brew a Czech Dark Lager on the pilot brewery first for three reasons. Firstly, I love the style – flavoursome and complex but also session-able and satisfyingly refreshing. Secondly, while we didn’t have any dark beers planned as part of our core range, I knew it would be wise to have a dark beer on tap at the very least and I wanted to start searching for a dark beer that would suit Straddie year-round. Finally, dark beers (especially tricky lagers) are a little more forgiving than their lighter cousins and I figured it would make a good dress rehearsal for the first pilot batch of Point Lookout Lager, a sort of sister style, a Czech Pilsener.

And so it was, that the first batch of beer brewed on our pilot system and the first batch of beer for Straddie Brewing was born, in a shed on the north side of Brisbane, far (even further than we realised at the time) from our future home on Straddie. The first batch fermented beautifully and tasted great. Soon a second was requested by family and friends, so quickly did the first disappear. It became clear we were on to something; we all loved this beer, and it was too good just to keep to ourselves. The test brew ‘tmavé pivo’ became our beloved Manta Dark Lager and also the first of our beers we had to find a name for, rather than the other way around.

Just like the creatures that swim silently across the label, Manta Dark Lager is a connection between the deep and dark, and the familiar and light. Rich malt character melds with peppery saaz hops in a way that creates dark fruit and spicy aromas and flavours more reminiscent of Shiraz than stout or pale lager. For now we don’t plan to have it available year-round, but rest assured when it runs out, it will return soon enough. 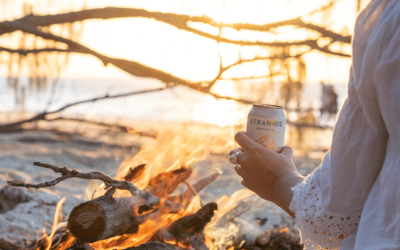 Straddie Brewing Co was born out of a love for North Stradbroke Island (Minjerribah) and great tasting beer, crafted...

We have lift off! 18 months behind schedule (thanks Covid), we are beyond ecstatic to announce that construction has...