The breathtaking views and pristine beaches at Point Lookout are the first images that come to mind for many when they think of Straddie. The north-eastern point of the island is a striking and dramatic rocky outcrop, defying the might of the Pacific Ocean and providing the perfect vantage point from which to witness an iconic natural spectacle – the migration of the humpback whale. It is a place of great beauty and reflection; how long have these whales been making their journey past this point, and how long have we been watching them?

When the inspiration to create Straddie Brewing first struck Troy (while holidaying on another island, this one in bonnie Scotland), the name ‘Point Lookout Lager’ and the image of the majestic humpback whale, soon followed. As we dug deeper and discovered the quality of the pristine, soft, sand-filtered water that flows from the aquifer beneath the island, it became inescapable; Point Lookout Lager simply had to be a Bohemian Pilsener.

“Point Lookout Lager simply had to be a Bohemian Pilsener.”

Czech Pilsener is built on four key ingredients that balance each other to perfection. Soft water, high quality pale barley malt, glorious herbal, floral and spicy noble Saaz hops and cool fermenting Bavarian lager yeast. Pilsener (or Pilsner) as a style has its origins back in 1842, in the town of Pilsen, situated in the west of what is now the Czech Republic. A Bavarian brewer, Josef Groll, was employed by the newly founded, citizen-owned brewery, and set about creating the first batch of a beer that went on to become the inspiration for the majority of beer brewed since. Quite an impressive first batch!

Pilsener and more broadly lager general, tends to be quite subtle in flavour compared to many modern ‘craft’ beers. It is also quite difficult and time consuming to brew due to that subtlety of flavour and the cooler fermentation and extended cold conditioning required. In our Point Lookout Lager, we keep things simple and classic. The soft Straddie water profile, German Weyermann Pilsener malt, a bit of Northern Brewer, Hallertau and plenty of Czech Saaz hops, all fermented by a clean Bavarian lager yeast strain. The result is a beer that is richly flavoursome and satisfying but also incredibly refreshing. Thirst quenching on one hand but a great match for seafood and margherita pizza on the other. Make the journey to Point Lookout and see if you aren’t inspired to enjoy a little refreshing reflection yourself. 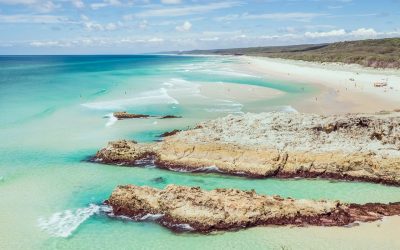